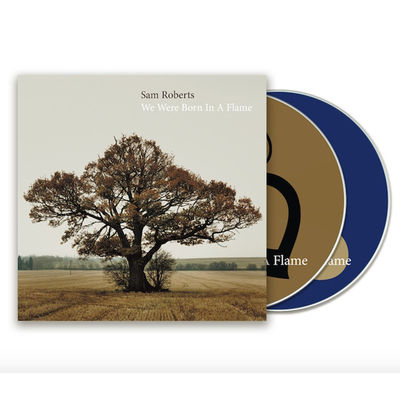 We Were Born In A Flame (Deluxe Expanded Edition) (2CD)

UMC is proud to announce the deluxe expanded edition of Sam Roberts iconic Juno winning debut, ‘We Were Born in A Flame.' The new expanded edition has been remastered with an entire extra disc added for both CD and vinyl editions. Originally released in June of 2003, ‘We Were Born In A Flame' Now includes 4 demos & 3 previously unreleased tracks + rare photos & memorabilia from the band's personal archives. Additionally, ‘Climb Over Me' only previously available on the band's 2002 indie release and an early vinyl edition is also now included.

The album put Roberts' snapshot, storytelling style, which follows in the footsteps of songwriters like Neil Young and Gordon Lightfoot, on full display.

‘We Were Born In A Flame' won 2004 Junos for LP of the Year and Rock Album of the Year Sam Roberts also won a Juno for Artist of The Year in 2004. Still an active band today, expect new music from Sam Roberts Band in the near future.